An Interview with Rufat Aliev 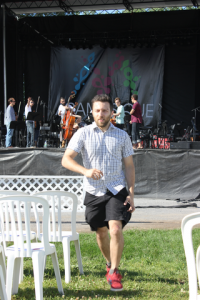 Rufat on the run …

Musitechnic is proud of both it’s grads and teachers who share their passion for audio. This interview combines the two. Rufat Aliev graduated Musitechnic in 2007 and has been teaching Audio Recording, Mixing and Live Sound at Musitechnic for the last four years.

MT : So could you describe your job

RA : I do live FOH sound for classical music, rock and pop both on tour and local shows.   My job consists of mixing the sonic elements in a concert situation using a speaker system which I will first calibrate for an optimal sound reproduction for each style of music.

MT : Who are your clients ?

RA : I have been working with Collectif 9, a classical music group, for 3 years now and is my current main project. I have always continued to do recording, mixing and other live sound and it allows me to meet a lot of artists and music groups such as  Orchestre 21, Wiz Khalifa, Yellawolfe, Beanie Man, Eric Lapointe just to name a few.

“When you’re on the job don’t be the person who drags the project down but rather be the one who gives it wings and helps it fly to greater heights.”

MT : How did your career start ?

RA: My teacher at the time, Denis Cadieux got me a gig and everything started from there. I just kept working doing live sound. Later on I became the resident sound tech at the Théâtre Corona where I met all kinds of great artists and very talented technicians.

MT : Talk to us a bit about a moment that was a turning point for you ?

RA : Collectif 9 was opening for l’Orchestre Métropolitain and I had the chance to really observe how a PA tech works the sound system. That night I mixed on the same system and it really opened my eyes. A few months later I took a training course to become a PA Tech. 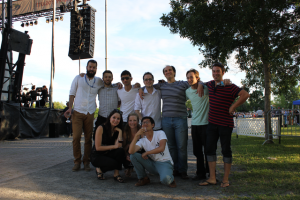 MT : Is there a project that you are especially proud of?

RA : Collectif 9 is my main project and I’m pretty proud of what we do. We started off with nothing and now we are at the point where we’re heading off on international tours.

MT : What are your tools of choice ?

RA: I have a really good knowledge of most DAWs but these are my favorite softwares : SMAART for Live sound and the calibration of PA systems, Studio One for Live recording, Nuendo and Pro-Tools for mixing . As far as digital consoles go I like Midas, Digico, Allen & Heath and Yamaha. For microphones I choose both digital and analogue Neumann.

MT : Could you give 3 pieces of advice for aspiring sound techs?

RA: Keep your eyes open, read a lot, take all kinds of courses. Have the desire and drive to learn more than the next guy and make sure you can adapt to the changing technologies. When you’re on the job don’t be the person who drags the project down but rather be the one who gives it wings and helps it fly to greater heights. It’s the project that counts and not you!