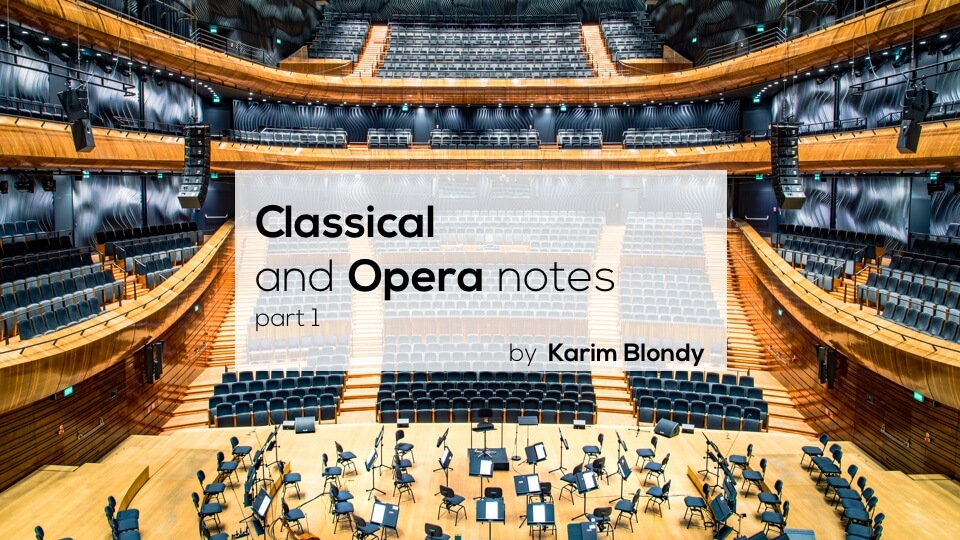 Most of the upcoming sound engineers I talk to come from a pop, rock, hip-hop or electronic music background and are rather unfamiliar with the world of so-called classical music or opera. Like in many fields, those around you can tell if you are in your place or not just by the way you talk and proceed especially if you do not have a basic understanding of the notions, vocabulary, rules and conventions. In a world where confidence is key they need to know they can trust you and your ears. I am going to share with you some of my observations from my first experiences as a sound technician working with ‘classical’ musicians. Here I’ll talk about some basic concepts and next time I’ll focus more on the actual recording session.

1) The sound of the orchestra: reverb

When an audience in a hall is listening to a symphony orchestra concert, chances are they hear more indirect (reverberation) than direct sound. Unless you are seated in the first few rows of the concert hall, most of the sound hitting your ears has already been reflected off surfaces and obstacles (walls, balconies, ceiling, seats…). This basically means that there is a lot of reverb in symphonic music (see chart) and that the reverb is an integral part of the music. The amount of reverb should therefore influence your microphone placement. Here are some examples of reverb parameters that you can start with:

The above comments regarding reverb are even truer when you are dealing with an orchestra performing an opera. The orchestra accompanying the singers will be placed in the pit, below the stage almost completely hidden from the audience. The direct sound of the orchestra therefore is never really heard by the audience. Bellow are some photos (from Wikipedia) that show the differences pretty well. 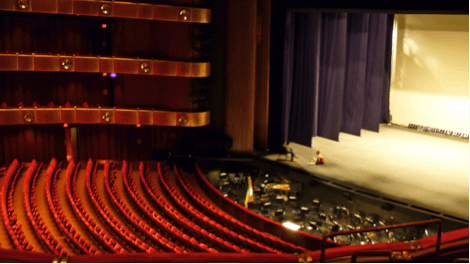 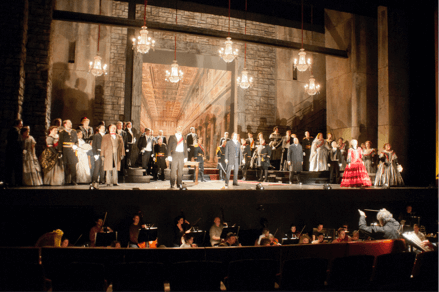 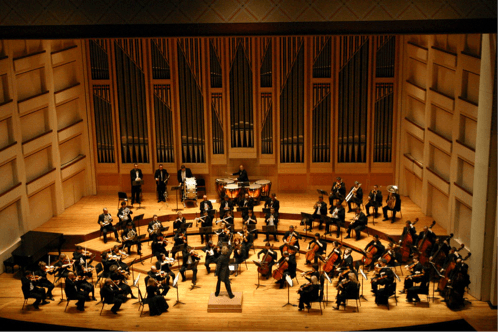 3) Good acoustics: for the musicians

When recording, ‘classical’ musicians can be very picky about the acoustic environment they record in. In order to get a good recorded performance the musicians need to be comfortable when they play and the reverb must sound good to them. An indication that they are ‘fighting’ the reverb of the room is when they feel the need to play quieter in order to avoid exciting the room/hall reverb. The opposite is also true. For example a vocal booth may be great for recording many sources but the lack of reverb may make a ‘classical’ musician uneasy. Adding reverb to a monitor mix could help however most ‘classical’ musicians do not use headphone mixes unless they really have to. The musicians will probably need time to adapt to how their instrument sounds in their headphones and that might modify the way they play their instrument. As a professional sound engineer you should be able to record a solo or duo without resorting to headphones. Forget trying to use headphones if you are recording an opera singer accompanied by a piano! If you need a talkback system use a quiet speaker placed in the studio.
When recording an ensemble the musicians also need to hear each other well. Ideally they should not have to change their way of playing during the recording. The musicians have probably practiced many times in a certain acoustic space and now their performance will be recorded in an acoustic space they may not be familiar with, an acoustic space where they cannot hear each other like they usually do. Even if the recording acoustic space is superior in quality, it may make the musician somewhat uncomfortable. I personally have never done a ‘classical’ session with monitor mixes like in a typical pop session so, if the musicians cannot hear themselves well, it generally means moving them around a bit. Remember, it is up to the sound technician to adapt to the musicians and not vice versa.

When working with a conductor you need to know that he is doing the mix. He is in charge of the tone (EQ) of the orchestra too. The musicians know how they need to play based on the score and the conductor’s signs. In theory you just need to capture the performance that the musicians are giving with the help of the conductor. The conductor is pulling the sounds he wants out of orchestra. You on the other hand have control over the reverb: as you place your microphones at a certain distance from the orchestra and capture more or less of the hall’s reverberation. What the conductor is holding is called a baton not a stick by the way.

Nothing says you are a ‘newbie’ more than not recognizing the instruments, both physically, when they are in front of you, and aurally, in the recording. If you say you like the sound to the clarinet and it is an oboe playing, you are not going to gain any credibility. For example, an inexperienced sound engineer may mistake a violin for a viola, and vice versa. They do look alike but the latter is physically bigger and sounds lower in register than the other. Obviously, critical listening skills are helpful and with experience you will be able to tell if it is a trombone or a French horn you are hearing. Also, you need to know that a string quartet is made up of two violins, a viola and a cello. Despite what some of the students I speak to sometimes think, there is no upright bass in a string quartet. Something else to remember, a symphony orchestra is made up of four groups of instruments: strings, woodwinds, brass and percussions. The saxophone is not part of the orchestra and neither is the piano. The harp is not always in the orchestra and neither is the harpsichord, although the latter is present in many operas for example.

Although the piano, or piano forte as it is officially called, is not part of the symphony orchestra, it can be heard with a symphony orchestra during a piano ‘concerto’. As an up and coming sound engineer though you have more chances of recording a piano accompanying a solo instrument or singer. For example you might record a violin student giving a recital with the piano accompaniment in lieu of a full orchestra. An opera singer could also sing accompanied only by a piano. If you are new to this genre, you need to be aware of where the soloist is generally placed relative to the piano (see diagram below). 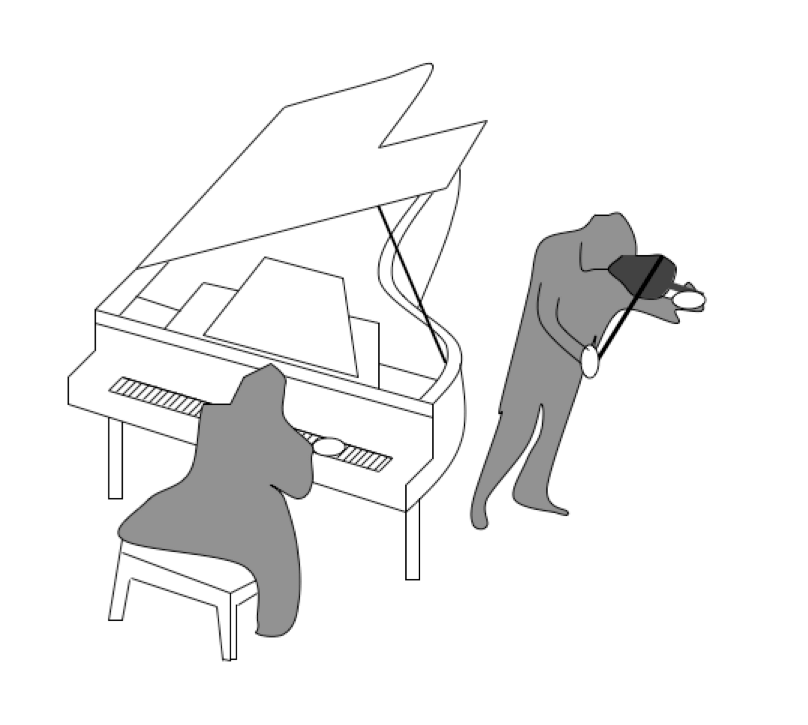 If the piano is accompanying a musician, place the musician where the violin player is standing.

As the piano is accompanying the other instrument or singer, the piano should be less loud than the other musician. That is where the lid of the piano comes into play. If the piano is fully open, it will be louder than if the piano lid is closed. There is also an ‘in between’ position that keeps the lid partially open. You can hear the difference in the following audio examples. Try to guess which audio file is with the piano lid open or closed.

I do not mean you should pretend to know ‘classical’ music. In the competitive world of audio engineering it is a pity to have to turn down a ‘classical’ gig  just because you are not familiar with the genre. The key is doing your homework: listen to the music. I go to the library and borrow different recordings of the same piece (different orchestras, different recordings). I read the liner notes that accompany the albums. They are generally very informative and actually serve as valuable guides while I do critical listening with a good pair of headphones. If you do not know where to start let me suggest Rupert Neve’s favourite: George Frideric Handel’s “Messiah”. In the next article I’ll focus more on the actual ‘classical’ recording session.