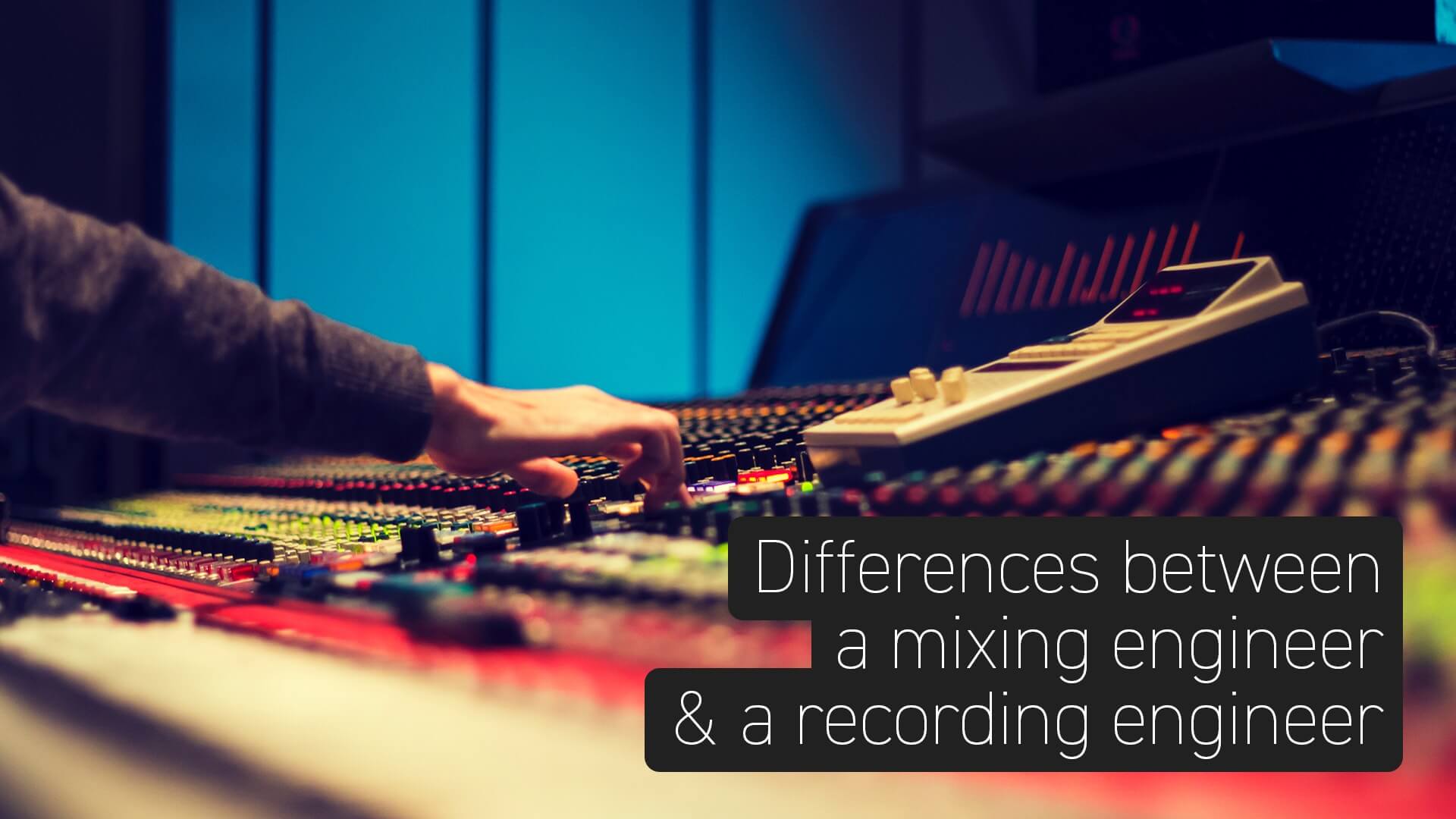 Recording and mixing engineers are key players in the entertainment business. Their roles are complimentary though people tend to confuse what each one’s mission is. Furthermore one sometimes plays both roles, adding to the confusion. Even though these audio professionals have points in common their roles are distinct and have different prerogatives.

What are the roles assigned to the recording engineer?

The recording engineer’s role is to ensure that the audio source is recorded correctly. In practice, and as the name implies, the job requires recording the audio (ambiance, musicians, film shoots, newscasts…). The recording engineer is responsible for the quality of the recorded elements. As such they take the necessary steps to optimize the recording and rid the sound field of any extraneous noises in order to capture, for example, a voice (Foley elements, musical instrument…) that will be used later and will require less equalization. In some situations several recording engineers might work together: One may be responsible for the recording device (monitoring levels for example) and another may be following the sound source with his microphone as a boom operator.

If the sounds to be picked up are not recorded but rather re-amplified and sent through loudspeakers to an audience such as in a concert, a conference or a public meeting, the mixing engineer for the event will generally take care of recording the sound sources too. However, when shows are recorded with a live audience, a recording engineer takes care of recording the event in order to ensure good recorded audio quality. They then have to work with the engineer who will mix for the audience in regards to microphone choice and placement.

Working upstream, the recording engineer takes care of setting up, preparing the recording gear (recorders, microphones, booms, cables, etc.). Their responsibilities also include configuring and adjusting the gear in order to get optimal sound quality. They are also in charge of supervising and dealing with any malfunctions (audio or other) that could occur during the recording. For example, they have to be sure that the gear will not fall and hurt a musician on stage. If the recording engineer is operating a boom they must ensure that the gear will not be damaged during a take (impacts or splashing liquids…) and be aware of their shadow on a film shoot,

The recording engineer must be versatile and maintain their equipment. They might also advise the production team on the special measures that need to be taken with regards to a particular recording. It is particularly for this reason that different fields call upon recording engineers who specialize in recording live shows, cinema, radio, television or even web broadcasts.

What roles does the mix engineer play?

The mix engineer combines the various discrete audio elements in order to create the desired sound stage. Whether it is the energy of a live concert, the artistic intention of an album, the atmosphere of a movie, the drama of a play or television show, this basically sums up the mixing engineer’s mission. The mix engineer is the one who will tweak and treat the tracks recorded by the recording engineer. This job also asks for a great artistic sensitivity and requires extensive technical knowledge.

The mix engineer works either on a dub stage (mixing films), in a studio (mixing music, radio shows or video games), in a concert venue (mixing live shows) or a theatre (mixing plays). In any case, their main tool is the mixing board.

THEIR main tool is the mixing board

Mixing can be done live during the event or at a later date. For a concert or a live event involving an audience such as a play or television show, mixing is done on the spot. However for movies or music albums, the audio mix is the last stage, sometimes years after the actual recording took place. The mix engineer has to take into account the client’s (director, producer, artist…) expectations. Having an analytical mind can help grasp the overall picture.

It happens that multiple mix engineers might work on the same project, sometimes simultaneously. During concerts one engineer will mix for the audience (« FOH ») and another engineer might mix the monitors for the musicians on the stage . Another mixer might also intervene: if the concert is recorded for DVD, it is probably another mix engineer that will mix the DVD version of the concert. During a television show with a live audience, one engineer will mix for the live audience (« FOH ») and another will mix the audio that will be broadcast on the air. If the show is to be broadcast later, this engineer might mix at a later date.

A good mix engineer is generally very knowledgeable of the world of music. A well-tuned musical ear and the ability to play an instrument can help when you need to give the desired colour or mood to a soundtrack you are creating.

Because their missions are linked to the audio world, the recording and mixing engineers go through the same training, possibly combined with additional specific credits. As the recording usually takes place before mixing it is important that both engineers understand their respective roles and what each other’s work entails, especially as they may need to work together simultaneously. These two audio professionals intervene in the entertainment business but also in corporate events and must both be versatile. This being said, in the fields of recorded music and motion pictures the mixing engineer is often perceived as being a level above the recording engineer. Besides, many mixing engineers have first worked in live sound, as recording engineers or as audio editors before moving up to mixing.