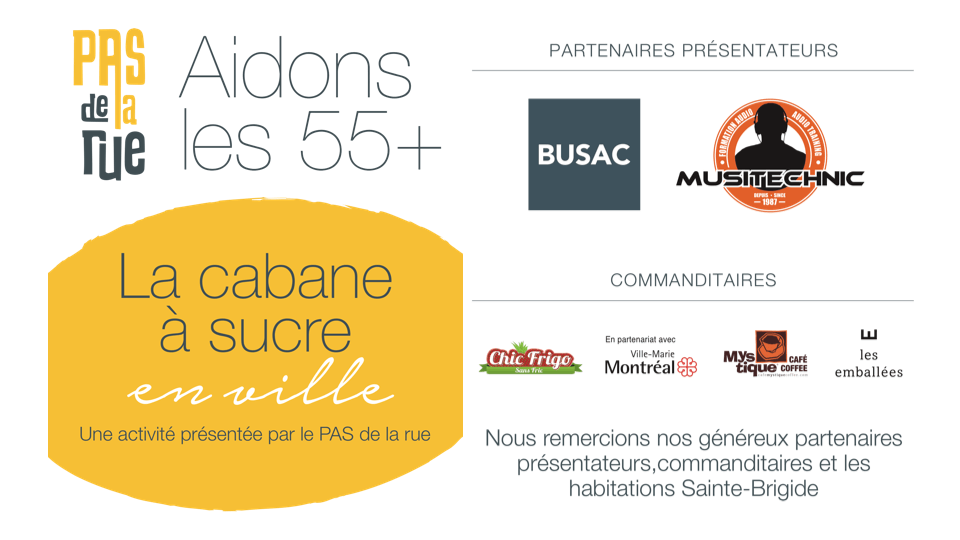 PAS de la Rue is an organization that helps those 55 years of age and older who have no fixed address and are in serious difficulties. On March 17 2016 they will be holding their Sugar Shack in the City which is a very much anticipated social activity.

« This annual event is a unique chance to offer a good time to the most underprivileged of our society. » Robert Beaudry, director of PAS de la Rue

A very much looked forward to event

This year PAS de la rue will hold the event in Montréal to be able to welcome an even greater number of participants. More than 100 people are expected at the event. The 2016 event is presented by BUSAC Immobilier, an important real estate holder in Montreal including Place Dupuis, and Musitechnic, an international school of audio and musical training. The activity is also taking place thanks to it’s various sponsorships and partnerships with  Chic Frigo sans Fric, Arrondissement de Ville-Marie, Habitations Sainte-Brigide, Agnus Dei, Café Mystique and Les Emballés.

The first time it is being held in Montréal

The Inner City Sugar Shack will be held this Thursday March 17 from 11:30 to 13:30 on the grounds of  Habitations Sainte-Brigide in the Ville-Marie borough  at 1225, rue Alexandre-DeSève. In case of bad weather the event will be moved inside the community hall.

The visitors will be able to enjoy the culinary preparations of Florence-Léa Siry, the professional canteen manager of Chic frigo sans Fric who is a master of healthy, inexpensive and creative dishes. All this will be served outdoors in a festive ambience.

PAS de la rue welcomes, supports and encourages all persons of 55 years and older who do not have a fixed address and who are finding life very difficult. The organization offers a variety of support initiatives such as a program of temporary housing, a counselling service and a support via a day centre.

On  May 7 2015, PAS de la rue received the ESTim Prize given by the Chambre de Commerce de l’Est de Montréal in recognition of the seriousness of it’s management , it’s proffessionalism and it’s deep seated engagement with it’s clientele.