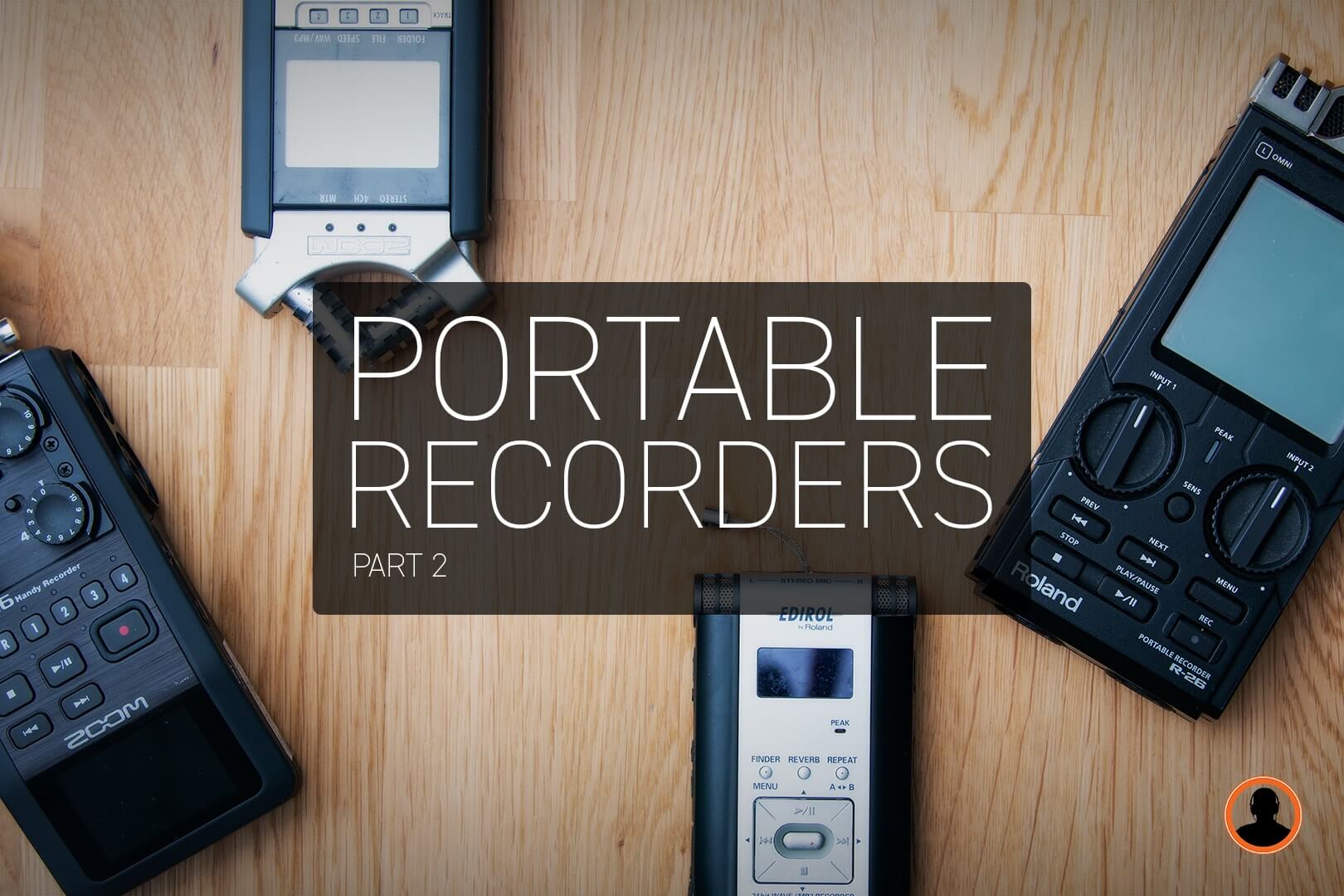 At Musitechnic we encourage our students to go out and record sounds they can use in their film post-production projects. Portable recorders are pretty handy when you want to just grab an ambiance or a room tone. I took 4 different portable recorders available at Musitechnic and decided to compare them with this purpose in mind. They are different recorders, some are more recent than others, some have little in common other than being portable recorders, but I’m comparing their sound when recording ambiances with a post-production perspective. I am therefore not going to look at the specs, I just want to listen to them in this context. If you are planning on using any of these recorders, listening to these audio files can help you make an informed choice. In the previous article, I presented the different recorders along with the first recording I did for this informal test. This time I will present you the other recordings along with my conclusions.

My next stop was at the mall. I put the recorders down on the edge of a table just like in the previous recording, trying to get the same perspective for all recorders. Here are the sounds so you can hear the ambiance for yourselves:

The same headphones were used and, again there were no audible problems on the tracks. The impressions I had listening to the previous track seem to be confirmed with this track. Like in the previous example the Edirol R09 has lots of low end (rumble is even more obvious in this example) and a narrower stereo width when compared to the Zoom H4 and Zoom H6 (this is especially noticeable when people talking walk by the microphones between 0’18 and 0’21). Locating sources is easier with the Zoom H4 and Zoom H6 than with the Edirol R09. The stereo width is similar on both Zooms, as is the general timbre: you don’t hear much spectral change from one Zoom to the other (the ‘room tones’ are pretty similar) but you do hear obvious spectral changes between the other recorders. The Zoom H4 and Zoom H6 still have that ‘hole’ in the middle feel on this track. The Roland R26 is darker than the Zoom H4 and Zoom H6 and seems even darker than Edirol R09 (you can tell if you listen to the ‘room tone’). The Roland R26 also felt wider than the Edirol R09.

For my last set of clips I recorded someone reading a poem. I put the recorders down on a table just like in the previous recordings, trying to get the same perspective for all recorders. Here are the clips so you can hear for yourselves:

Still the same monitoring headphones were used and again, there were no audible problems on the tracks however, with this quieter source, the internal noise and hiss of the recorders becomes apparent. The background ‘room tones’ also have different sonic personalities and choosing one over the other can be a question of personal taste. Something else that becomes obvious is the ‘room’ effect. The room in this example is large and resonant. It is not an ideal room in that the lack of acoustic treatment causes undesired ‘echoes’ to be heard. These ‘echoes’ (the reverb of the room) in turn cause comb filtering (phase cancelations and additions). For intelligibility purposes I would prefer a recorder that minimizes this ‘room’ effect. Also worth mentioning, none of the recorders seemed to emphasize ‘plosives’, those consonants (p, t, b, k, d) that cause microphones to ‘pop’. No pop filters or screens were used but the recorders, placed on a table, were lower than the mouth of the standing speaker, and that position probably helped. Another important element in speech, sibilance, was pretty consistent and not exaggerated from one recorder to the next.

The Edirol R09 was the noisiest recorder with lots of very audible hiss. The low-end comments of the previous examples are still valid but the hiss in the high end of the frequency spectrum becomes problematic with the Edirol R09. In addition, the ‘room’ factor mentioned above is audible and makes the recording sound a bit cheap and lo-fi. On a voice, the sound of the Edirol R09 is more fatiguing to the ear and will psychoacoustically cause the listener to ‘tune out’ faster than when listening to ‘cleaner’ recordings.

The Zoom H4 is much more pleasant to hear because there is less hiss. I started wondering if the Zoom H4 doesn’t simply have a frequency response that falls in the highs thereby making any hiss less obvious. All hiss is not equal: hiss does not affect us the same way depending on the frequency band it is in and, depending on what other audio content could be masking it. This voice example is interesting because here we do not really have (or want) stereo components so as we listen to the different takes we notice the stereo microphones pick up the mono source differently. The Zoom H4 and Zoom H6 XY (‘coincident’) microphones receive the sound source at the same time and thereby eliminate some phase issues. This contributes to the more pleasant sound of the Zoom H4 and Zoom H6 recorders when compared to the Edirol R09 and Roland R26 that have a ‘near-coincident’ configuration.

The Zoom H6 has more low-end than the Zoom H4, something we noticed in the previous track. The hiss is even quieter on the Zoom H6 than the already-quiet-Zoom H4, which makes for a more pleasant listening experience with even less ear fatigue. Basically, with the Zoom H6, the only hiss left is low-end rumble it seems. The Zoom H6 seems to have a frequency response like the Zoom H4 that falls off in the high frequencies and hides any potential internal noise. Like the Zoom H4, the Zoom H6 minimizes the potential ‘roominess’ of the recording.

The Roland R26 is somewhere in between the Edirol R09 and the Zooms when it comes to hiss. Rumble is audible, showing the Roland R26’s low-end sensitivity. The ‘roominess’ of the recording however makes it sound inferior to the Zoom H4 and Zoom H6.

With a spectral analyzer on each recording, the same low frequency rumble and the same high frequency attenuations can be observed as on the first track: 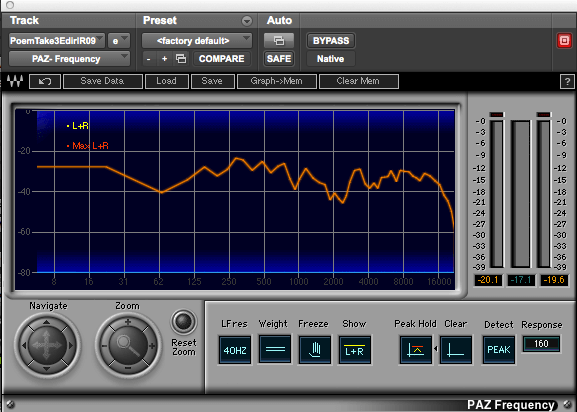 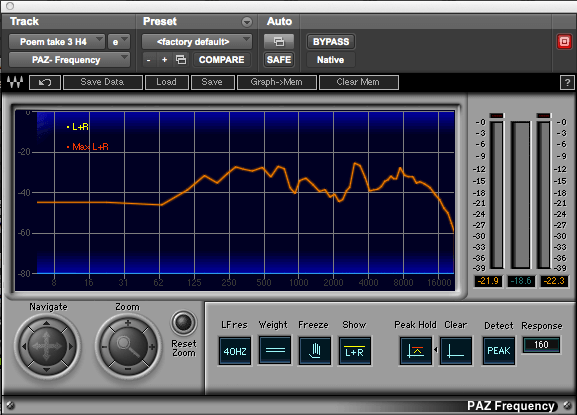 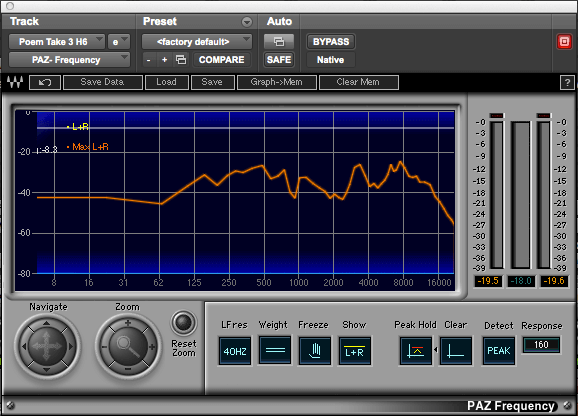 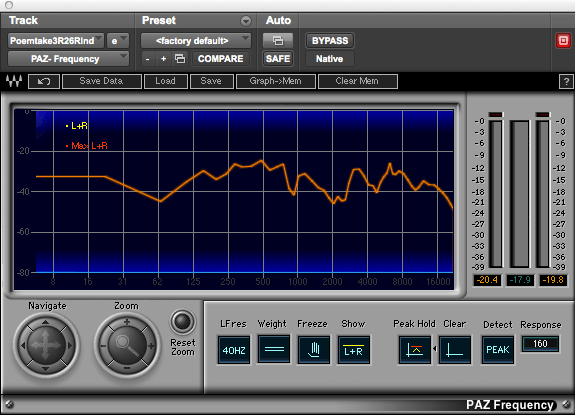 Wondering about mono compatibility, I put a phasescope on these tracks. You can see for yourselves in the photos below. This allowed me to see that all the recordings were very mono compatible and it also allowed me to confirm the stereo widths of the different recorders. In the following pictures you can see the Zoom recordings are wider than the others. 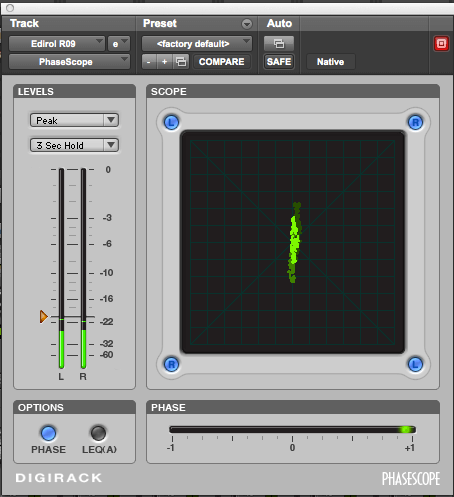 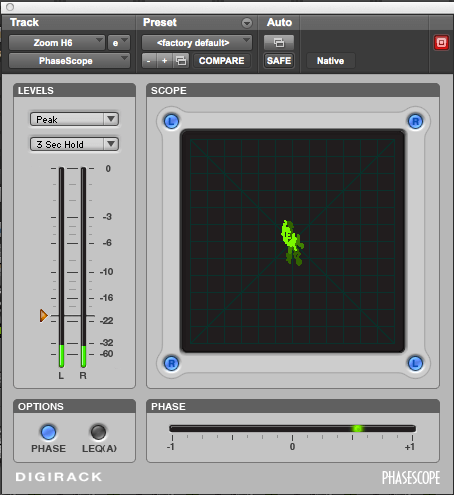 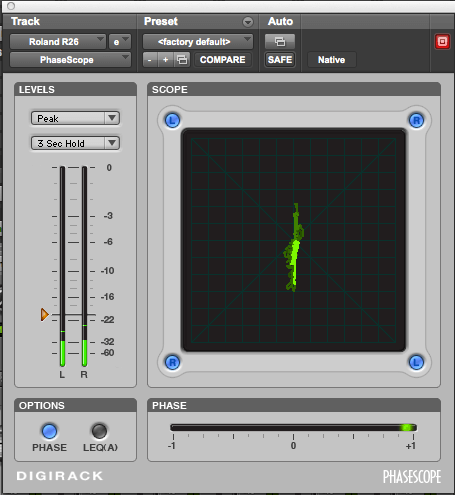 In conclusion, all the recorders are useable; the more recent ones are better. While carrying out the recordings I noticed the Edirol R09 distorts easily so you really need to check your input levels and leave plenty of headroom with that one. A High Pass Filter can solve many potential rumble issues. Some recorders like the Roland R26 even provide a HPF at variable frequencies. I believe the main differences lie in the stereo field (AB or XY) each recorder captures and ultimately it comes down to taste: What is the color of the sound the recording engineer is looking to capture? Some recorders offer multiple stereo configurations so that can be a factor in choosing a recorder. How discretely you are able to pick up sounds can also make a difference, the smallest recorders allow you to go unnoticed more easily…