Preparing to mix: 25 tasks to accomplish before mixing (Part one) 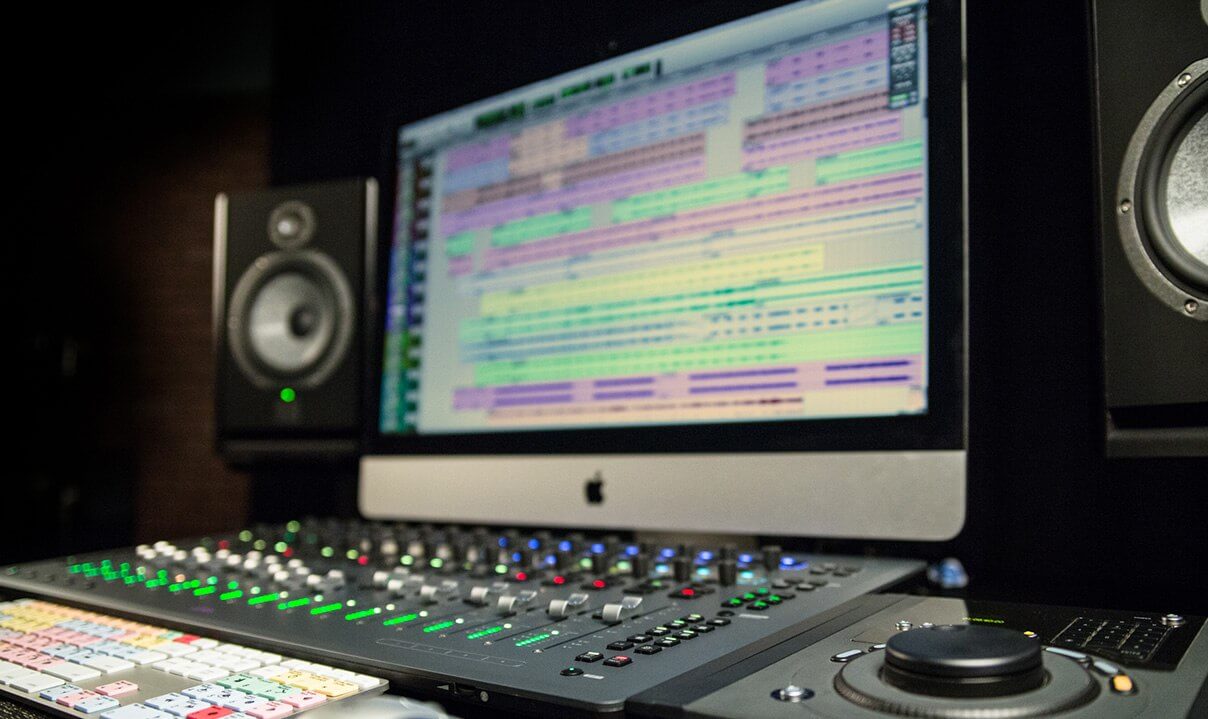 Preparing to mix: 25 tasks to accomplish before mixing (Part one)

Achieving a good mix obviously depends on the taste and ear of the mixing engineer, however as is often the case, it is the preparation that comes beforehand that really allows the engineer to show his or her talent on the mix without worrying about or having to fix problems that can get in the way of the work. This preparation is a task in itself and, in the case of big productions, is usually the responsibility of the assistant mixer. Here are a few tasks you can accomplish, before beginning your mix session, in order to help the mixing process. It is a non-exhaustive list of rather technical tasks, which, once accomplished, allows for creativity and imagination to be expressed freely. This list does not necessarily apply to all types of productions but accurately illustrates the important role the assistant mixer plays in a studio. Even though we will only see here the steps preceding the mix session, the assistant mixers work continues during and after the mix session. The points discussed here will give you an idea of the time required for a project and will therefore help you when negotiating a fee with a client. It can also simply be a checklist that will help you improve your mixing talents faster. Here is part one:

1- Arrange the order of the tracks

You likely have a favourite order for visualizing tracks. If you do not have to waste time searching for tracks you will be more efficient and your creative process will not be interrupted. The classic order begins with the drums (« kick », « snare », « hi-hat »…), then the bass guitar. In order to save time, try to use the same order for all your sessions. 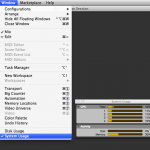 The sessions that I work on sometimes contain some tracks that are useless for the mix. These MIDI or virtual instrument tracks should not be required because one usually uses audio tracks and buses for the mix. You may find some tracks with a click or “ghost” tracks, which were used as a base for overdubs. You should not need these either for the mix. There may be some tracks with alternate takes or different microphones (one track with a close microphone and another track miked from further away or an amplifier track and a DI track). It will be necessary for you to choose the tracks that will be useful and the ones that are not used can be made inactive. You can also erase some tracks. The ones you are not sure about can simply be deactivated. In ProTools, like in other DAW software, the unused tracks will still tax your CPU. A quick glance at the  “System Usage” window in ProTools will show you the difference, especially if these tracks have plugins inserted.

The name of the instrument or sound must appear as a track name. The recording engineer may have named the tracks with the microphone model, which are of no use to the mixer. When comping the different takes of the same instrument, the name of the track may have changed. Remove all the numbers and symbols (for example: BassA.03_2-2) that clutter visibility as much on the software as on the control surface. On the control surfaces (the C-24 for example), the display of the track name is often limited to only a few characters on an LED type screen. The control surface will often favour the display of capital letters and numbers.

4 – Color the tracks and the clips/regions

It may seem trivial, but organised colors do not tire the eye uselessly, especially during long sessions. By using the same color code from one session to the next, the eye gets accustomed and no longer needs to read the name of the track to identify it. The sounds and instruments that are similar can bear the same color or a similar one. Violins in light green and cellos in dark green, for example. By assigning the same colors to the tracks as to the audio regions, we ensure a sort of consistency.

If what you are mixing comes from an acoustic instrument, a human playing an acoustic instrument or signing, it is possible you may need to retune some of the tracks. A slightly incorrect pitch from one or several tracks can compromise a good mix. It is important that the people involved know that in order to do your job properly, the tracks need to be on pitch and well tuned. But be careful, if tuning some parts can be done quickly, tuning several entire tracks that require the care of software like Melodyne or Autotune may take several hours. Also remember that no matter how much time is spent mixing, if the singer is off key to begin with, your mix will go to waste.

6 – Take care of the transitions: fade-ins, fade-outs and crossfades 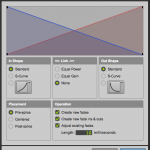 It is possible that the tracks were recorded in different studios, different sessions, with different musicians. The tracks must be integrated to the mix session in a conscientious manner making sure that there are no audible “clicks”.  Sometimes the edits from a comping session are poorly done and must be adjusted in order to avoid double attacks, in the drums for example. 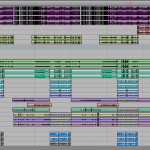 Ideally when mixing an album the client has provided clean and uncut audio files, not a previously edited and assembled collection of short segments. Once you’ve done the editing (if necessary) and the transition fades (if necessary), you can consolidate the tracks. This will make the tracks easier to manipulate (like in a remix) because instead of having a dozen (or even hundreds) of audio blocks on one track, you have only one that comprises all the different blocks. In ProTools, check your “Disc Allocation” before proceeding. Having several small audio segments as a result of the editing session can solicit the CPU excessively as it will be working overtime to recover the different segments that are scattered all over the hard drive. By consolidating all the segments, you will lessen the task for the computer, especially if the session is complex. When mixing a film, however, the different segments are not assembled in order to allow for traceability of the process (“workflow”); when touch-ups are necessary it is easier to have access to the session as it was after the editing. 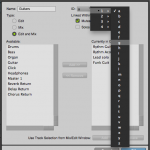 Grouping the tracks will make some of the steps in the mix process easier. Some software will allow you to assign a key on your keyboard to a group of tracks. The guitar group can, for example, be activated by hitting the G key, the voice group can be activated with the letter V, and so on. When you receive the session it is possible that some groups have already been assigned (from the recording sessions for example), in this case erase any unnecessary groups! 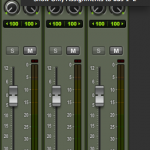 You will likely require several buses. Create them all at the beginning rather than as you go so that you will not have to interrupt your creative process for something technical. Some buses can receive groups of instruments (for example a bus for the drums, one for the back-up vocals, one for the guitars or the synths. Others can receive effects: reverb for voice, reverb for instruments, voice delay, guitar delay, etc… If you must make instrumental versions and acapella versions, some buses will receive other buses. For example the drums bus, the guitar bus and the synth bus are directed to a bus that is called “Instruments”, the back vocals and lead vocals buses are directed to a bus called “Acapella”. 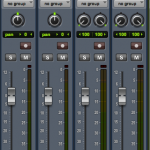 Take this occasion to check the inputs of the other tracks. At the mixing stage, you should not need to record anything. In some software, a track whose input is assigned (to a physical input of the sound card) requires more CPU that one that is set to no input (like “No Input” in ProTools. The input and outputs of the tracks should be checked in order to make sure there are no errors, sometimes a bus used during the recording is still present and can interfere with the buses used for mixing. 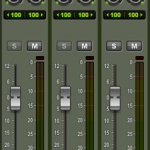 During the mix, you will likely use auxiliary tracks for your effects (reverberation and delay in particular) as well as bus tracks for your groups (“drums”, “back vocals”, “synths”, etc…). If it hasn’t already been done, you should put all these auxiliary tracks in “solo safe” mode. When you activate the “solo” mode on an audio track, you will not need to also activate the “solo” on the corresponding bus or on the effect tracks associated with the soloed track. Do the same for the bus groups described in step 9 above.

12- Only show what is necessary in your clips

Once again, to have a clear view of your work without tiring the eyes, get rid of all the clutter you do not need. The audio clips in ProTools can display all sorts of information that can hide the graphic representation of the wave. If each track contains only one audio block, it won’t necessarily be problematic but if the track contains a multitude of segments each displaying all sorts of information, the actual graphic content of the track becomes hard to see. Personally I display no clip information in order to properly see the shape of the wave. This allows to see where the audio begins and ends in relation to the clip and allows to make sure that the region does not finish before the natural decay (or release) of the sound.  What’s more, a good view of the audio allows you to see any small sounds (breathing, “clicks” or “ticks”) that you wouldn’t necessarily hear when listening to several tracks at the same time.

13 – Only show what is necessary on your screen

Try not to clutter your screen either. It’ll prevent you from having to navigate with your mouse and there’ll be fewer useless details there to distract the eye. I try to hide as many “rulers” as I can. I don’t need to see the audio regions on the right either. My insertion points appear in another window so I don’t display those here either.