Preparing to mix : 25 tasks to accomplish before mixing (Part two) 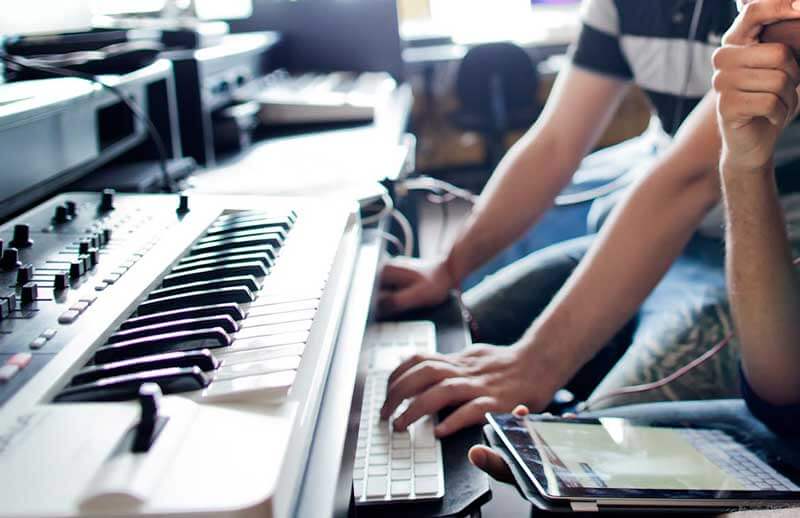 Achieving a good mix obviously depends on the taste and ear of the mixing engineer, however as is often the case, it is the preparation that comes beforehand that really allows the engineer to show his or her talent on the mix without worrying about or having to fix problems that can get in the way of the work. This preparation is a task in itself and, in the case of big productions, is usually the responsibility of the assistant mixer. Here are a few tasks you can accomplish, before beginning your mix session, in order to help the mixing process. It is a non-exhaustive list of rather technical tasks, which, once accomplished, allows for creativity and imagination to be expressed freely. This list does not necessarily apply to all types of productions but accurately illustrates the important role the assistant mixer plays in a studio. Even though we will only see here the steps preceding the mix session, the assistant mixers work continues during and after the mix session. The points discussed here will give you an idea of the time required for a project and will therefore help you when negotiating a fee with a client. It can also simply be a checklist that will help you improve your mixing talents faster. Here is part two of the list: 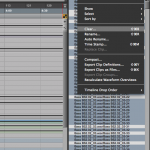 Once you’ve cleaned your session up (see point 9 above) it can be wise to get rid of useless audio (“Select Unused” the “Clear” in ProTools) in order to lighten the load (in Bytes) of the session. If your mix session comes directly from the recording sessions, you may be carrying around with you multiple playlists associated with as many takes. A lighter session cuts the transfer time from one studio to the other. Also, you probably have other things to do than backup gigabytes that are of no use to you.

In general a client/artist already has an idea of the sound they want for their album or production. Import into your session the tracks that the artist has named as a reference. For example, a client will give me a track to use as a reference for the drum sound and the bass, another that can be used as a reference for the voice, another that will be your reference for panning and stereo width.  Adjust the fader of these tracks so that they sound at the same level as your mix. This will make going from your mix to the reference tracks easier (using the “solo” button for example). Whether you use it or not, it can be wise to import the rough mix provided by the client into your session. Inevitably the client will compare the mix you will be offering to the rough mix that they know and love. 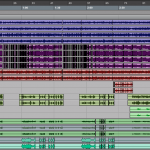 Ideally, the markers have already been placed during the recording sessions. If that isn’t the case you will save time if you set at least a few markers. A marker for the beginning and one for the end are essential. With these two markers all the mixes you will get out of this session will have the same length, which will help when the client comes back with comments or precise time indications. If each mix of this session has a different length, things will get complicated pretty fast when some people have version 1 of the mix and others have version 2, etc… In any case, mixes that have the same length just look more professional. In ProTools for example, it is so easy that there aren’t any excuses. You just need to remember a few commands to have a quick mix from marker 1 to marker 2 (on the numeric keys of your keyboard hit .1. and then hold “Shift” down and hit .2. followed by “Alt command B”, which will select both markers and “Bounce to Disk”),

17 – Put the EQs in first position 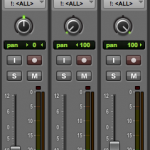 Whether you place your equalizers before compression, after compression, or before and after, either way, the objective is to make it easier for your brain and to avoid spending time searching through the track inserts to find which plug-in is your EQ. If you aren’t using the same equalization plug-in from one track to the next it is even more tiring to find. The idea is to stay in creative mode (right brain hemisphere) and to avoid interrupting your concentration for a purely technical task that solicits the left side of the brain. If your EQ is always in first position, you do not need to ask yourself where it is. This does not prevent you from adding an EQ after the compressor if you so wish.

18 – Put the compressors in second position 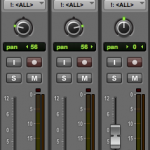 In ProTools, automating a plug-in requires that the sound engineer activate the automation for the needed parameters of that plug-in. For example, if you know that you will vary the feedback parameter or your echo plug-in, activate its automation right away. Another good example: on the equaliser of an acoustic guitar track, the cut-off frequency the high pass filter can vary between the intro (when the guitar plays alone) and the chorus (when the guitar shares the frequency spectrum with other instruments).

20 – Insert plug-ins on the Master

Insert the plug-ins you will need on your master track. If you do not have a master track yet in your session, this is the time to do it. Following the levels of the master track is a must so you’ll want to have a level indicator, like a VUmeter. A phase indicator (in the form of a phasescope for example) will allow you to check the integrity of your mix. It is a good idea to place it here as well. When working on an album, you’ll find that clients often compare the mix you’ve just delivered to another mix from a similar artist. It becomes necessary at this point to present a mix that has already been through a “pseudo” mastering in order to get as close as possible to the final product. In order to achieve this, simply place your favourite compressor on the master track but make sure to deactivate it on the last version of the mix that you will be send to the mastering engineer. An EQ on the master can allow you to make some small final touch-ups on the entire mix. However, if you have a lot of equalisation to do, then it is likely there is a problem with the mix! Remember that you are mixing and not mastering and you should not have to tweek this track too much.

21 – Creating a folder to store the different versions of your mix.

You will probably have to send different mixes of the song to your client at different stages of the mixing process. Creating a folder right from the start into which you will place all the different mixes will help you to stay organised and avoid having to search for files later on. I often send MP3’s by email to my clients, but I keep the .WAV versions in a folder just in case… If the client prefers a previous version of the mix, I can access it easily. If this is the version that will go to mastering, then the MP3 version I sent to the client no longer has any use, you will absolutely need the uncompressed file (.WAV for example). 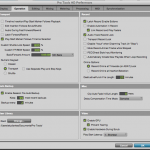 A session can become corrupted. Thankfully, in most software it is possible to set up automatic backups that provide other copies of your session. With ProTools, since the session is small in size (the audio files are the greediest when it comes to disk space) I tell the software to make a copy every minute. Backups were covered in a previous blog.

23 – Think about archiving your session

You will still need to have your session saved at two different places (on a cloud, on a USB key or on a hard drive). If you have never had any problems, its probably because you haven’t been working that long! 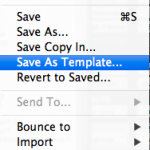 If you work on any recurring project (commercials, tv series, album…), having a session to start with your usual configuration can save you hours of technical work (left hemisphere of your brain) and allow you to be more creative faster without wasting time on other tasks that can be tedious. With a complex session, the preparation time requires a level of concentration, which can exhaust you before you even begin to mix! Once the session is set up, save it with a different name so you’ll be able to retrieve it later. When you have a moment, open it and get rid of all the audio in the session so as to only keep the tracks and their plug-ins. Here are some examples of things you will not need to worry about for your usual tracks: their inserted plug-ins, their auxiliary sends, their output bus, their group, the pan position, etc… This method works well when mixing an album with instruments that do not vary much from one track to the next. If needed you can keep certain audio files that will be needed with each session. For example, in a commercial that always uses the same music or in the case of a television series that has the same opening and closing music.

You are finally ready to start mixing. You can now have fun and give way to your creative expression. Don’t forget to include preparation time to your bill.

As you may have noticed, preparation can take hours, confirming the importance of working with a template. Clients will be impatient to know what is happening with their mix and so preparation time should be minimised as much as possible. You have a budget to respect so less preparation time means more time for mixing. Keep in mind that you should be at least as efficient as your competitors. If you think of some points I haven’t mentioned, I would love to hear from you.