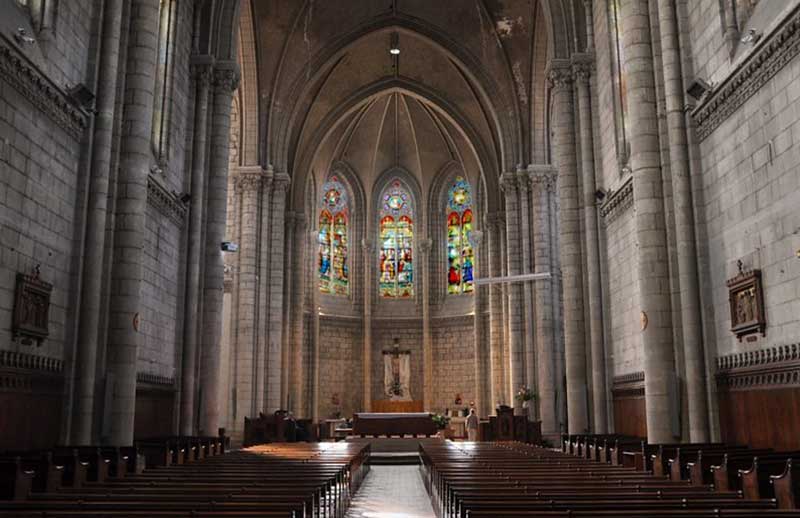 In Montreal, more and more “pop” concerts are being booked in churches with artists such as Philippe B., Louis-Jean Cormier, Avec Pas D’Casque and DJ Champion. In a previous blog I touched on the acoustics of churches, how the sound travels in a church and why we appreciate it. Here we tackle several points that a sound engineer must consider when recording or mixing a live “pop” show in a church.

In a studio environment, a room that has a lot of reverb is called « live » and a somewhat less reverberant room is called « dead ». For a pop artist (save any spiritual or other motivations), choosing to put on a show or recording in a church is choosing a place where reverberation is part of the sound.

When recording in a dead environment, the amount of reverberation added to the signal can be different for every source or instrument. It is the auxiliary send from the mixing board that takes care of it (moving the microphone away from the source can also help to add some reverb). In a church all the sound sources are sent towards the reverberation and all have the same level of reverberation. The sound engineer will find some acoustic solutions (placement of the musicians, sound insulating panels…) in order to control the propagation of sound sources, in particular the low frequencies. In a church the reverberation is acoustic and natural, in a dead environment the reverb is artificial. Like in many concert venues, the presence of a large crowd allows for the reverberation, which in a large church can seem uncontrollable, to be reduced.

In the studio or in a concert hall, it is possible to equalize an auxiliary send or to apply equalization directly in the reverb « plug-in » for example. In a church there isn’t as much control over the frequencies originating from the source that will have or won’t have reverberation as there is in studio. Even though placing acoustic panels can absorb some frequencies, it is however more difficult to control the lower frequencies to which we generally do not add reverberation for reasons of clarity or intelligibility. What’s more, for certain shows, the sound panels are not very esthetic which is a major deterrent. In certain churches, the choir is placed in wooden acoustic boxes that serve to control the propagation of sound and allow the singers to hear themselves and each other.

During a live show in a church, because the sound must be amplified, it is important to watch the level of reverberation that the different microphones pick-up. It is a matter of ratio between the direct and indirect sound, in other words the distance between the microphone and the source. The signal that is picked up by the microphone is sent back into the church (via the speakers), which will create more reverberation. There will potentially be feedback. The lower frequencies are to be monitored, as they are often responsible for triggering feedback. If the microphone is close to the source, the sound in the speakers will perhaps offer sufficient reverberation. Too much reverb compromises the intelligibility of fast-paced rhythmic music.

Here are a few reverberation parameters that acousticians consider as being appropriate for a spoken voice in a church. They can serve as a starting point for creating artificial “churchlike” reverb or can help for comparison of the natural acoustics of a church you know:

-A predelay of 330ms, which is about one syllable in a normal speaking flow (three sounds or one syllable per second).

-The reverberated level must be 10dB lower than the direct sound to favour intelligibility and avoid straining on the listeners ear. A listener who has to concentrate to understand will have a tendency to lose interest and think of other things.

In order to compare, here are a few parameters of reverberation that are recommended for a speaking voice in general :

-Predelay between 10ms and 20ms

Here are a few reverberation parameters that acousticians consider to be appropriate for church music :