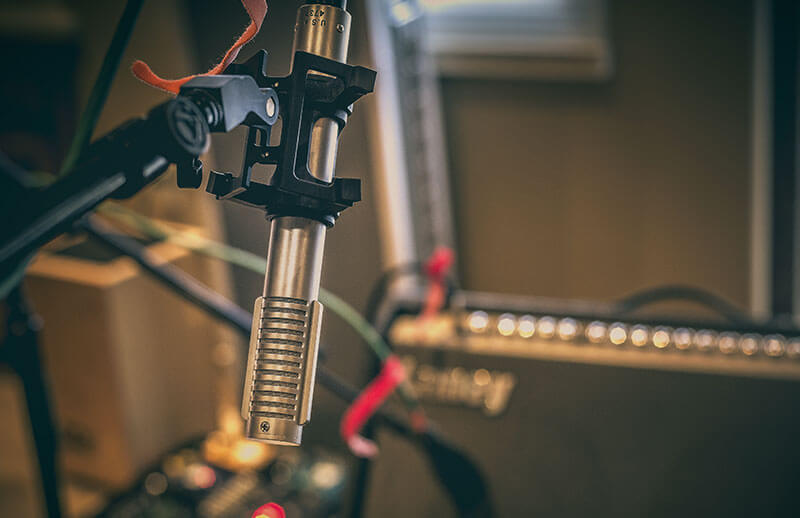 In December 2014, Musitechnic had the chance to host a presentation by ribbon microphone manufacturer, Royer Labs and I am again taking advantage of this opportunity to return to the subject of ribbon microphones. In Ribbon Microphones Part 1, I went over the reasons why ribbon microphones are a big deal. I talked a bit about the history, the myths and the reality surrounding ribbon microphones and why you might choose a ribbon over either a condenser or a dynamic moving-coil. This time I’ll provide some audio examples so you can actually hear the difference for yourself.

In order to fully benefit from these audio examples, a quality playback system is necessary. Headphones are ideal to hear the subtle nuances and eliminate the sound of the listening room.

A multi-microphone (close miking) drum setup: Kick, Snare, Tom 1, Tom 2, Overhead left, Overhead right. There is no hi-hat microphone. Even though the snare has some natural room reverb, the drums may be a bit dry for some.

Instead of adding artificial reverberation I will add the stereo signal of a distant MS recording done with a AEA 44 ribbon microphone. The ambiant tracks really open up the drums but you may find the natural reverb too present. The reverb is there all the time. It sort of feels like as if the drums are in an empty swimming pool. It is not a question of level because the ambiant track faders were already pretty low but rather it is a reverb time or decay problem.

In order to control (or reshape, as some would say) the amplitude envelope of the room reverb, I inserted a gate (dynamics modifier) on the ambiant track and side chained it to the snare track: every time the snare plays it opens the ambiant track. Dial up a gate release time that cuts the reverb before the next kick is heard and you have a nice natural reverb. Gated ambiant ribbon microphones were used in a similar setup for the drums on the Sex Pistols “Nevermind The Bollocks”. They used multiple distant microphones where as I’m using just one. Obviously you need a large studio for this technique.

Why use a ribbon microphone? If you want a dark (as opposed to bright) reverb, a ribbon will do the job because it does not have the potentially aggressive highs you can find in a condenser microphone that would otherwise be used in this type of setup. The thin metal ribbon naturally absorbs and reduces the high frequency transients and since condenser capsules naturally have a higher resonant frequency than ribbons, condenser microphones tend to sound harsher (or ribbons to sound smoother depending on how you look at it).

This session illustrates a situation where the band doesn’t know what bass sound they want. You could setup a variety of microphones (including a DI) in front of the amplifier giving you more options when comes time to mix but I’m only presenting four of the options that were actually recorded so that we don’t get lost in endless comparisons.

By the time you get to hear the ribbon microphone (it’s the last one) you should be pretty startled by the difference in sound between them. Ribbon microphones tend to exhibit a heavy proximity effect as you can hear in the audio files. The crucial question is, when choosing the right microphone, what are the needs of the song. For example you need to make sure that your kick drum is not in the same frequency range as the bass if you want to use a ribbon microphone. If the arrangement of the song is very busy, the low lows may be the only frequency band left to place the bass. If the tempo of the song is fast you might want a microphone with more attack. If the bass line is very melodic you may lose some subtleties with the ribbon. If however the bass is very rhythmic, eighth notes and provides the backbone of the song the ribbon might be fine. The choice is yours.

This recording was done in an acoustically treated isolation booth that didn’t have any particularly interesting acoustics so the bidirectional characteristic of the microphone was useless here. It should be mentioned that the ribbon microphone would probably sound better a little further away from the amplifier. In case you are wondering, I ended up using a combination of two microphones for the mix: one for the low frequencies, the other for the attack. If you choose to do that, you need to check for phase issues between the two tracks.

The cello is close miked by a condenser (U87) and a ribbon (R84) about a foot from the F hole. The microphones are attached to each other so that they ‘hear’ the same sound coming from the cello. The R84 is bidirectional so the U87 is set to the same polar pattern for comparison purposes.

Bear in mind that the larger the instrument, the further the microphone should be to get a natural sound. Knowing that the studio room that this was recorded in was rather small and not very live sounding, I placed another U87 as high as I could go and as far away from the cello as possible in order to get some room sound. The microphone was in cardio and aimed at the cello.

The order in which we listen to the audio files will influence our judgment as we compare everything we hear subsequent to the first audio file to the first file, which now is our reference.

Other ideas you can explore

1) Use a ribbon microphone and a different type of microphone to record the same guitar amplifier and then pan the two tracks to opposite sides of the stereo field. No EQ necessary! Add a few milliseconds of delay (no more than 20) if you want to get the feel of two different performances (like the electric guitars in Metallica, Nirvana …).

2) Use the ribbon as a close microphone and a condenser as an ambient microphone.  Pan one to the left and the other to the right.

– The White Stripes – “Get Behind Me Satan” was recorded only with ribbon microphones.

–Michael Jackson – “Off The Wall”. Producer Bruce Swedien used ribbons for the album’s percussions. A pair of RCA44s were used for the bottle percussions on “Don’t Stop Till You Get Enough” for example.

– Elvis Presley – “Elvis Presley”. RCA ribbon microphones were used for the voice and the band on songs like “Heartbreak Hotel”.