Rufat Aliev : on tour in China with Collectif9 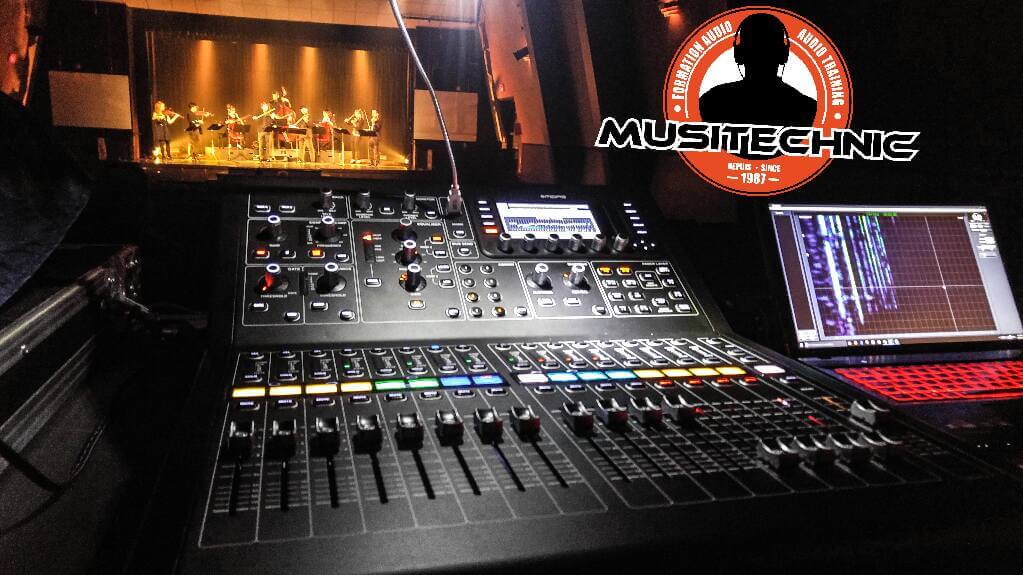 In December 2015 I had the chance to tour China with my musical group Collectif9.

Going on tour with a musical group is a lot of work for the entire team, as much for the artists as for the administrative and technical teams.  Often a tour means that you are gone for at least a week and you are completely cutoff from your usual environment. To deal with Murphy’s Law you must make sure that you are prepared well in advance for anything and everything because ” the show must go on”. I am going to share with you not only my experience but some advice as well to make sure your tour goes as smooth as possible. 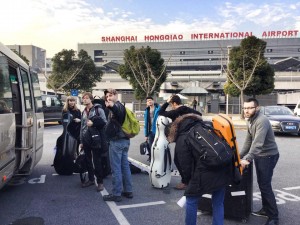 Once you are on the road, the main players that make the tour function are the Tour Manager, Artistic Directer and the Technical Directer. The Tour Manager takes care of the planning, transport as well as all the documentation that is needed. This includes arranging the visas, hotels, planning the routes and scheduling.  Because of their work the team can function as a team. Our Tour Manager, Julien Compagne did an excellent job. One of his jobs was to deal directly with the various Customs officials. When you bring something of value back to Canada, even if you owned it before leaving, there is a very good chance that it might be confiscated when coming back through Customs. To avoid this kind of problem when going on tour outside of Canada, don’t forget to fill out the E-15 and Y-38 forms and if you want to be really sure, make sure these forms are stamped at the Canada Customs office at the airport before leaving. [Form Y38, Identification of Articles for Temporary Exportation has been renamed BSF407 and the Y38-1, Label for Identification of Articles for Temporary Exportation, has been renamed BSF407-1.]

The Artistic Director looks after the presentation of the show. This covers the musical content, the order of the musical pieces, where the musicians are placed on stage and they work with the lighting and sound technicians to create the ambiances needed for the show. 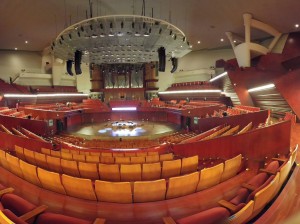 As the Technical Director I had to know not only everything about the sound setup but also the lighting. Very often the soundman is the Technical Director and this was the case with Collectif9. The group has to give a lighting plan, a stage plan and a patchlist to each room the group is going to play. This makes the job go faster and doesn’t leave the setup crew guessing about what they are supposed to do. The lighting plan, as the name indicates, is a plan that tells the lighting crew what types of lights to hang and where to place them according to the choices of the Artistic Director. The lighting technician also recieves a “cue sheet” which indicates the desired ambiances, colours and the “punchs” in each piece. The “stage plan” and the “patch list” are often combined with the first stating the placement of the musicians and their audio monitors and the second is a list of the microphones, the mic placement and the input numbers on the console.

Every touring soundman has their own “sound kit”. This kit varies from one soundman to another but, in general, it would include calibration tools, reference music that the live sound engineer knows well, effect processors etc … [su_pullquote]This “kit” is your tool box and you depend on it. It becomes very important to do “backups” of everything that can be backed up on a regular basis and even double backups. You have to be able to do your job and get through the gig even if some or all of your tools aren’t working.[/su_pullquote]

My kit is pretty straight forward; a SMAART RIG that includes a computer, an interface and a calibration microphone. I use my computer for many tasks and even though it’s quite solid, I am very careful with it. The computer is the weak link in the chain and I make sure that I have multiple backups of every aspect of it.

Firstly, a USB key is my “boot drive”. This allows me to start my computer in “recovery mode” if it doesn’t respond. Once in “recovery mode” I connect an external hard drive that contains an image of my system with everything I need to work. Nothing less and nothing more. This back up system allows me to reboot my computer and be up to working speed within 40 minutes. Secondly, in case my computer is completely “kaput”, I have another usb key that has all the software drivers and programs to load onto another computer in both Mac and PC format. If every thing just crashes or my travel baggage with my “sound Kit” gets lost, I know I can calibrate the sound system with some of the tools on my cell phone or from another backup usb key attached to my keychain. In case of having absolutely nothing on me, I still have one final secret backup.

Musitechnic is our technical partner for the 2015-2016 season and loaned us the Midas M32R console. The Midas allows me to save all the parameters of the concerts and recall them immediately as well as doing virtual checks. The parameters are saved as « scenes » and I carry them around with me on four usb keys as well as having a backup on Google drive. One of these usb keys is on my person, another in my kit, a third in my baggage and the fourth… I find a place for it at the last minute. In China Google, Hotmail, Facebook and other American sites are blocked so you need to think about buying a VPN application to bypass the Chinese  firewall . 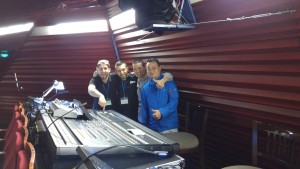 It is very important to carry your own electronique adapters around with you because in China the connectors and voltage is not the same as here in North America. Most professional gear can operate both in 110V and 240V and this was the case for my equipment. If not I would have had to bring transformers to change the voltage to 115V.

I multitack recorded every concert using Studio One by Presonus. This software was the most reliable recording software I could find and it is so light on the system. I also had backups of the multitracked shows since I use a lot of  “virtual soundchecks”, a multitrack playback from the console that allows me to work on the sound without the musicians needing to be there. There is still a traditional live “soundcheck” but it is much shorter than usual. The goal is to keep the musicians fresh and energetic for the show.I want my work to have the least amount of effect on the musicians and on myself as well …. it’s a good thing.

Whenever you go to work in foreign countries , there is always some doubt as to the quality of workmanship there. Do they work quickly and efficiently, what is their level of proficiency and is their equipment in good condition? Good thing for us that all the rooms we played in were well equipped, well calibrated and the teams were well trained and competent. Just don’t be surprised if no one speaks English. Luckily for us we had translators. These translators followed us everywhere and even ordered our food since knowing what to order wasn’t easy. I’m sure you’ve been in restaurants in “North American China Towns” where the menu is just a list of dishes without photos. Well in China it was the same thing but in Chinese. Not so easy to choose a dish. If you see a restaurant that has pictures in the menu, go there. There is a good chance there won’t be too many like it.

In conclusion, touring in an another country is a challenge and a test of one’s capabilities but with our really good team and the awesome people in the group as well as the technical support we had from Musitechnic, the tour of China was an amazing experience. As long as you prepare for the worst and never forget Murphy’s Law, everything will be just fine.

You can read more about Rufat Aliev here