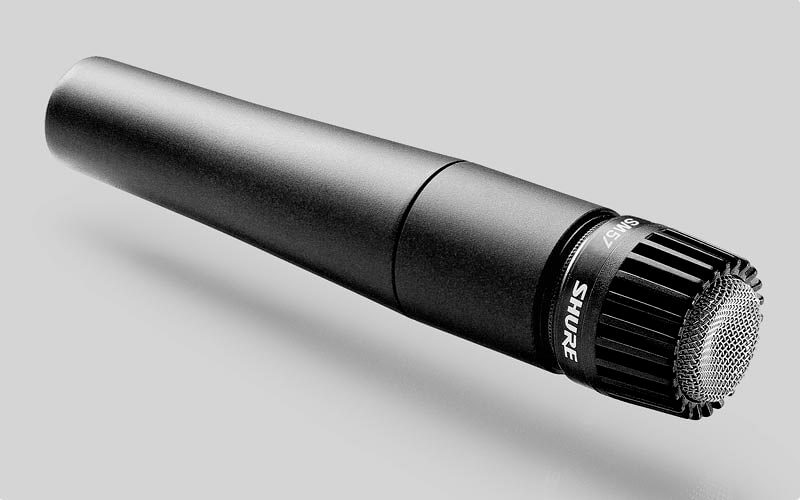 Today we’ll look at one of the microphones available at Musitechnic, the classic Shure SM57, the largest selling single microphone, even after 50 years. Going over the specs here, we’ll look at why the SM57, the 2003 Tech Grammy winner and TECnology Hall of Fame 2004 inductee, has the place that it has in the audio world, and in the Rock Band2 Video Game. A legend at only 100$ may seem surprising but that is just one of the ironies behind the SM57s history and design that we’ll look at next time.

What is so great about the SM57?

I don’t want to simplify and claim that these technical aspects are the only reasons why sound engineers choose an SM57 as taste (or lack of taste!) is always an important factor in the choice of microphones. Other microphone manufacturers offer products with similar specifications but the SM57 seems to have the right balance of art and science.

The frequency response of the 57 can be characterized by a boost in the high frequencies between 4kHz and 12kHz (with a 6dB peak at around 6kHz). This high frequency boost is useful for adding vocal presence and helping a singer’s voice cut through a busy mix.

The frequency response shows that the microphone is less sensitive to frequencies below 200Hz. A low cut around 200Hz is good for attenuating the proximity effect (an increase in bass frequencies as the microphone is placed close to the source) when picking up a guitar amp or a snare both live and in the studio.

The frequency response also starts to drop above 14kHz giving the SM57 a warmer sound than a flat condenser for example. This cut in the higher frequencies prevents the SM57 from being too aggressive as the microphone already rolls off below 200Hz and adds a boost between 4kHz and 12kHz.

The unidirectional cardioid polar pattern probably helped the SM57 become a staple of live shows. A cardioid pattern is ideal for focusing on the sound in front of the microphone and rejecting sounds from the back and, to a lesser degree, the sides.

The SM57 is indisputably solid which makes it a favorite for live. The die cast steel handle can take a hit from a drummer’s stick with no damage and the pneumatic shock-mount system attenuates general handling noise. The SM series of microphones were born following three years of research that included hundreds of tests involving dropping, throwing, cooking, salt spray immersion and submerging. Shure microphones go through a process of physical abuse that goes back to the days of the military battlefield Shure was building microphones for. It’s no surprise Shure microphones can be found on space shuttles (SM 11). As the many videos on the internet testing and abusing a 57 can attest, the microphone can survive fire, being thrown, humidity, being immersed in water, buried and dropped from a helicopter.

Although I was unable to find the maximum sound pressure level the 57 can take, it goes without saying that if it can take being a few millimeters from a snare drum or stuck on a guitar amplifier grill it will cover most sound sources

Being that there are so many microphones to choose from and budgets always seem too small, buying a microphone can be a daunting task. With microphones, like with many commodities, you generally get what you pay for. However with the SM57 this is not necessarily so as almost no rock’n roll, r’n’b or other pop studio session happens without a SM57 on an amplifier or snare, even if more expensive microphones are available. If you don’t own a studio it may not make sense to spend 2000$ on a microphone but it’s harder to make an excuse for not owning a 100$ legend. This low budget compatible microphone will give you your money’s worth and at such a low price sound engineers have learnt that you can use it all the time without risk!

Shure keeps on being innovative but they also understand that there’s nothing to fix (cause it ain’t broke!). People at Shure must wonder why they can still sell SM57s because they are unbreakable. In 1989 the Beta 58 and Beta 57 microphones appeared on the market with supercardioid polar pattern (great of rejecting unwanted surrounding sounds) and high output level (even weaker pre amps will do even on softer sound sources) meant that sound engineers could have plenty of gain before feedback would occur in live shows.