Starting a career in the audio industry (Part 2) 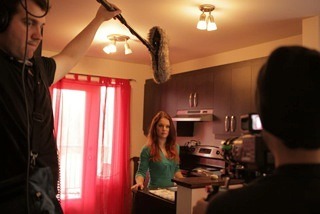 Starting a career in the audio industry is one of the biggest challenges for recent Musitechnic graduates. Many of the jobs available are short-term contracts and for self-employed professionals. It is contract work, which, if all goes well, becomes recurrent rather than sporadic. That is why the first steps into the professional world are crucial and must be managed well. Like in the first part of this blog, I am writing today for those who, having been absorbed in student life, need some advice regarding their first contracts. Those who have already gone that route can help to light the way for the aspiring sound engineer. Philippe Génier teaches at Musitechnic and, like many sound professionals, he has had a variety of jobs in the industry since his graduation from Musitechnic. Here is the second part of what he shared with me regarding his first gigs as a boom operator for films.

Now that he has gained experience, I ask Philippe whether on location sound recording was a part of the industry that interested him. “Initially, no, I had some preferences, like most of us I prefer to produce music but I took the first thing that was offered to me”. And it was precisely this open-mindedness that allowed Philippe to do exactly what he wanted in the end: music composition. When we look at what being hired as a sound recordist eventually led to, we can see that in certain cases he was initially hired to do record but also ended up being hired to mix the given project. In other cases, the sound recording contracts came from other members of a team that he had previously worked with which. This was even more important for Philippe, as it is through them that he obtained his first contract to compose music for film. Event if these sessions had not allowed him to mix or compose, the experience in itself allows him to add to his CV and portfolio.

Did the need to make contacts bring Philippe to do things that were not planned or for which he was not even paid? For Philippe it is simple: “You give people a hand, you don’t want to be seen as idle or lazy”. He was there to score points and make a good impression and he did what was necessary from his own free will to achieve that, no one forced him to do anything, he insists. For example for his composition projects, he wrote more than what had been discussed initially, by choice, without feeling any pressure to do so.

To earn a living the sound engineer offers a service, in this case sound recording. With a similar sound recording quality, the service provided by two sound engineers can be the same, but the way this service is rendered can become even more important than the service itself. When the skill level is the same, it is the manner of each engineer that will set them apart. That is why Philippe makes sure to be punctual, to smile and to always be pleasant. Most of the team members will not hear the rough takes from the audio recording. The only element that the team can base an opinion on the sound technician is his interaction within the group, as opposed to his actual work. I wouldn’t go so far as to say that demeanor is the only thing that matters, the work matters too. But when a sound engineer works he is in fact taking on his own advertising, he is his own representative for his own company. The relationship he has with the team must not be neglected, all the more since he counts on the recurrence of contract offers and he will likely end up working with same people, same teams and the same producers more than once.

Musitechnic’s role in all this?

The degree Philippe holds from Musitechnic gives him the credibility that he needs to score contracts from the contacts he already had. It is thanks to the knowledge he gained from his training at Musitechnic and the confidence that comes with it that Philippe got his first internship. It is also the year of studying that made him qualified to carry out the tasks he was assigned. It isn’t sufficient to have contacts. It is also insufficient to only land the contract as there will be some real technical work that you’ll need to perform. The technical aspects required are definitely covered in your training, the rules of etiquette however are not taught at Musitechnic, it is part of your personal baggage. Philippe was complimented on his punctuality. He had learned to work with a smile before coming to Musitechnic. “When you are on the set you have to be able to drop your phone and be aware of what is needed. I was working all the time and it isn’t always easy to stay busy when there are long breaks in filming”. It’s a fact, the more waiting times there are, the harder it becomes to stay concentrated on your role and the task at hand.

There are several things to keep in mind from Philippe Genier’s experience.

-First, anyone is a potential contact, not only your friends but also your teachers at Musitechnic as well as all your classmates, your parents’ friends, your neighbors, your in-laws, your in-laws’ neighbors… you get the picture. The students at Musitechnic that you have met, whether they are in your class or not, will be your first contacts in the industry as they are tomorrow’s sound professionals.

-Another thing to keep in mind: several years can go by between two contracts with one same client. It is indispensable to make as many contacts as possible and let people know what you do. The contract worker is constantly in professional mode because you never know whom you will meet.

-It must be understood that, like in many other fields, school is only part of the equation that allows you to work in this fascinating industry.

-You have to be open minded to work in the audio industry in order to avoid being cornered into a single job or field. This can mean taking the first contracts that come your way even if they are not ideal. From those first experiences you will move on to other opportunities and meet other people.

-Make contacts while developing your existing ones: even if your contacts don’t bring you any work directly, if you work on their projects you will meet other people who may in turn offer you some work.

-Always be presentable and in “rep” mode as you never know where the next contract will be coming from. Your class colleague of today can call you in a year because the company he is working for is looking to hire someone. Have you warranted your classmates’ vote of confidence? If you need to borrow equipment in six months, which one of your contacts would likely lend it to you?

Take a step back from your year of studying and take a good look at your personal situation.